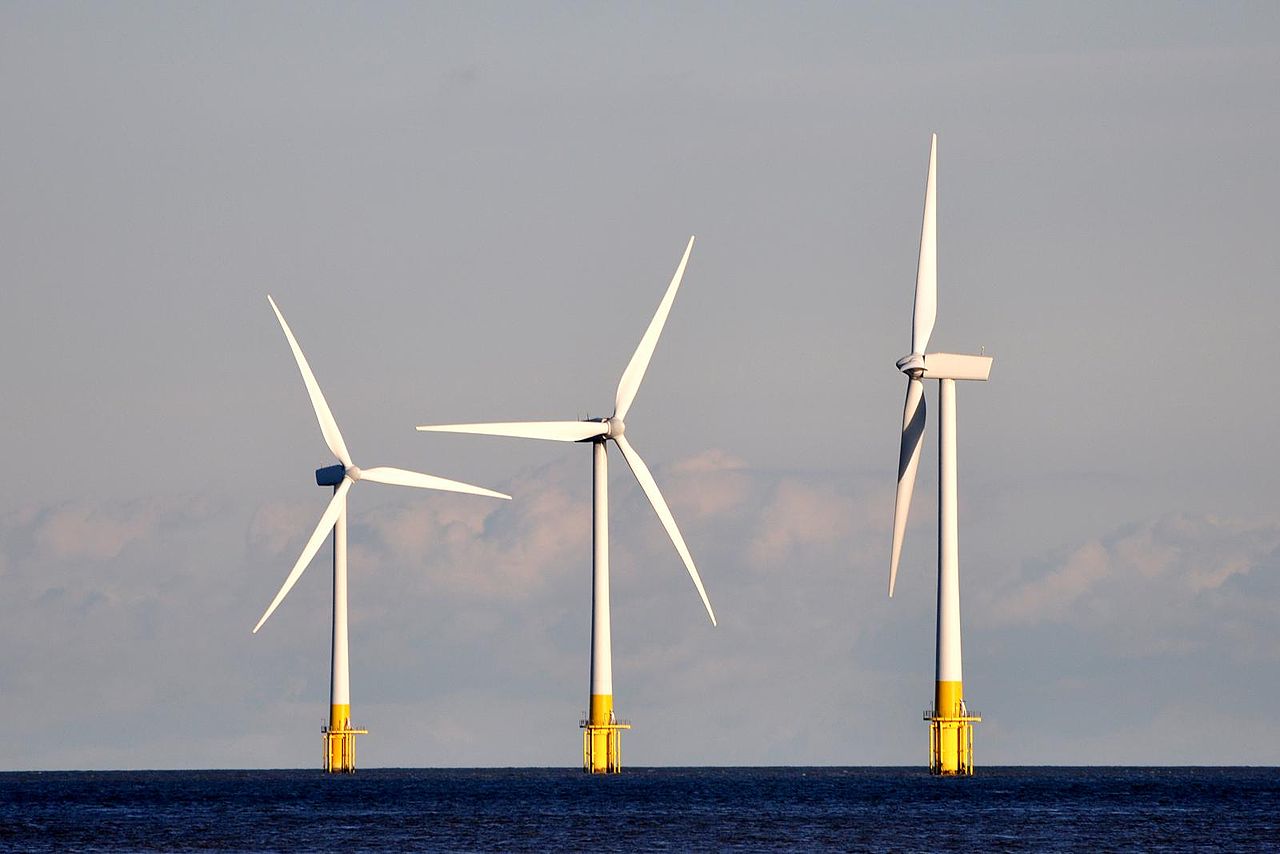 2016 was an interesting year for Volkswagen. Despite earning better-than-expected profits, the company was still plagued by its 2015 diesel crisis. Fittingly, themes of accountability and transparency dotted Volkswagen’s 2016 Sustainability Report and supporting materials. Works staff weighed in on the strengths and weaknesses of the company’s communications.

How would you summarize Volkswagen’s 2016 Sustainability Report in one sentence?

Wesley Gee, Director of Sustainability: It’s humble in its design and approach (a good thing), which is symbolic of the company’s need to change its culture (a better thing).

Carlie Waksdale, Designer: Its simple and clean design errs on the side of dry, but given their recent scandal, reservation might be a wise move.

Alex Laderoute, Writer and Content Strategist: It checks all the boxes on the imaginary sustainability report checklist, but it could have gone farther – radical transparency, if you will. 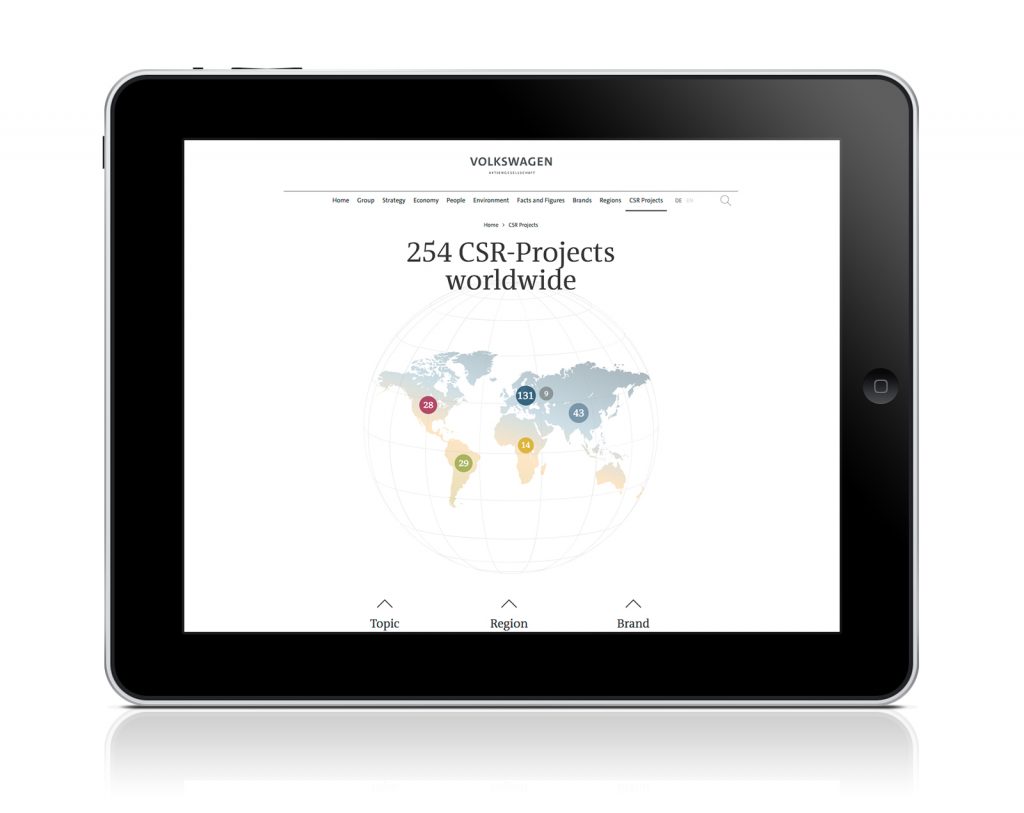 The report features an interactive CSR-projects globe, which users can use to filter initiatives by region, topic, or brand.

What was the report’s greatest strength?

Wesley: This is the second year in a row that they have reported on the diesel crisis. It shows they care about what stakeholders want by acknowledging their concerns. Publishing stakeholder testimonials – even though they contain criticism – showcases external opinion and calls attention to opportunities for improvement. If you’re confident enough to list your achievements, you should be confident enough to list your missteps.

Carlie: Volkswagen’s elegant design tactics make this robust and dense report easy to digest. The CSR Projects section is the most interactive and most successful. Using animation to sort by topic, region and brand is a nice feature when looking for key information. There are diagrams and infographics – a common but strong reporting trend – to make the material easy on the eyes. Colour-coding sections is a nice touch, if not groundbreaking. And the typography adds an air of reassurance.

Alex: I’m glad Volkswagen created an entire section on the diesel crisis. It’s not hidden or buried deep in the report. The visual timeline or “Chronicle” is transparent and provides details on the business impacts of the scandal, status updates and next steps. Still, it starts a bit late. I’d like to understand the events leading up to the lawsuit. 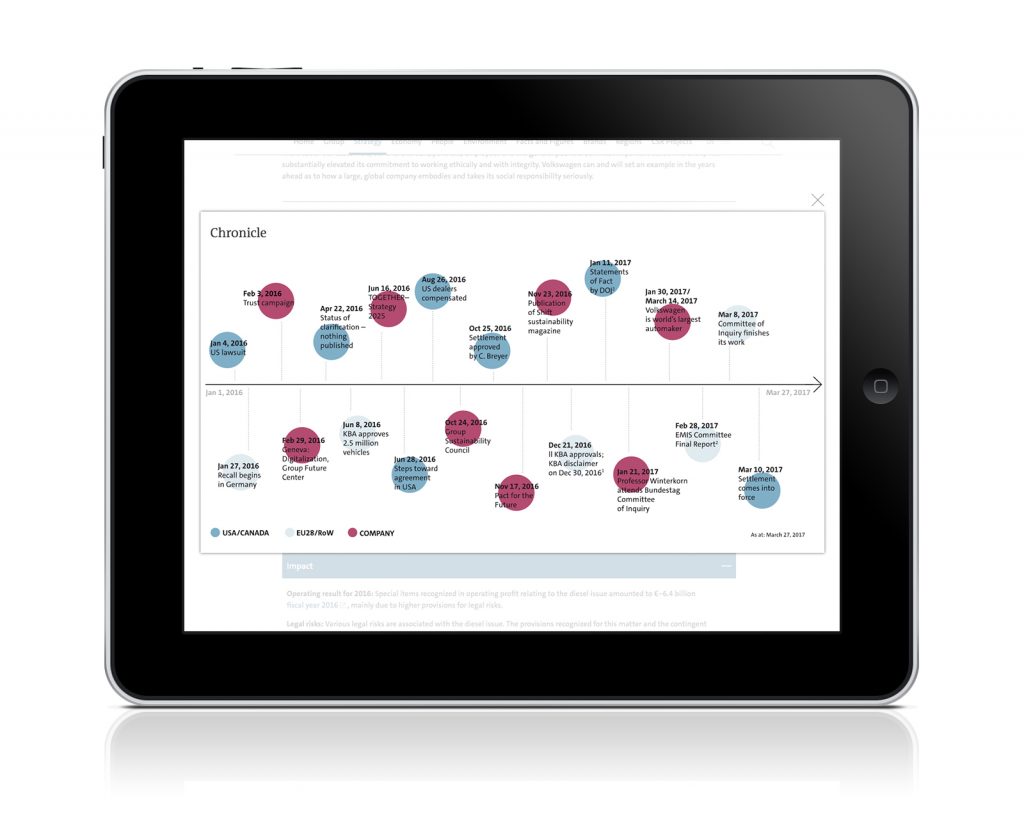 A static timeline chronicles events between the filing of a US lawsuit and March 27th, all related to the Diesel emissions scandal at Volkswagen. To make this concept more impactful, we would have like to see a visual that explored circumstances at VW leading up to the decisions that caused the missteps initially.

Where did this report miss the mark?

Wesley: Volkswagen addresses a number of challenges for the automotive sector (automation, e-mobility, etc.), but many building blocks do not have targets, which is what we should come to expect of a 2025 Strategy. Stranger still is the presence of dead hyperlinks that no longer drive to said strategy. For a company that was once a sustainability darling, I hope that Volkswagen learns from its mistakes and communicates significant changes to both its approaches and culture.

Carlie: The theme Responsibility and Change, to me, doesn’t come through visually. I’m not sure what the diamond line illustration on the landing page is supposed to represent – “coming together”? If Volkswagen really wanted to keep the line motif, they might have tried integrating it more explicitly in each section to bind the report. Portrait photography is also a great way to convey ideas to an audience. People connect with images of other people, and this report has very little personal photography.

Alex: The “Letter to our stakeholders” is a missed opportunity. I don’t know whom it’s from because it’s signed with only names – no titles. I had to Google “M. Mueller” and “B. Osterloh” to learn that these men were the CEO and Works Council Chief, respectively. Volkswagen needs to make clear who these people are and what role they have in fixing the company’s problems. To me, this communicates a lack of accountability.

Check out The Works’ Sustainability Reporting Trends: The Best for 2017 for more of our comprehensive research and insights. 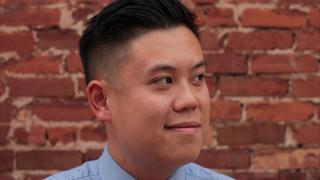 Barry specializes in script writing and other editorial pursuits. He is a clinical Torontonian and has no intention of dropping the habit. Check him out on iTunes – his show is called Hogtown Talks. We recommend the episode where he interviews Alan Cross about a curly slide. 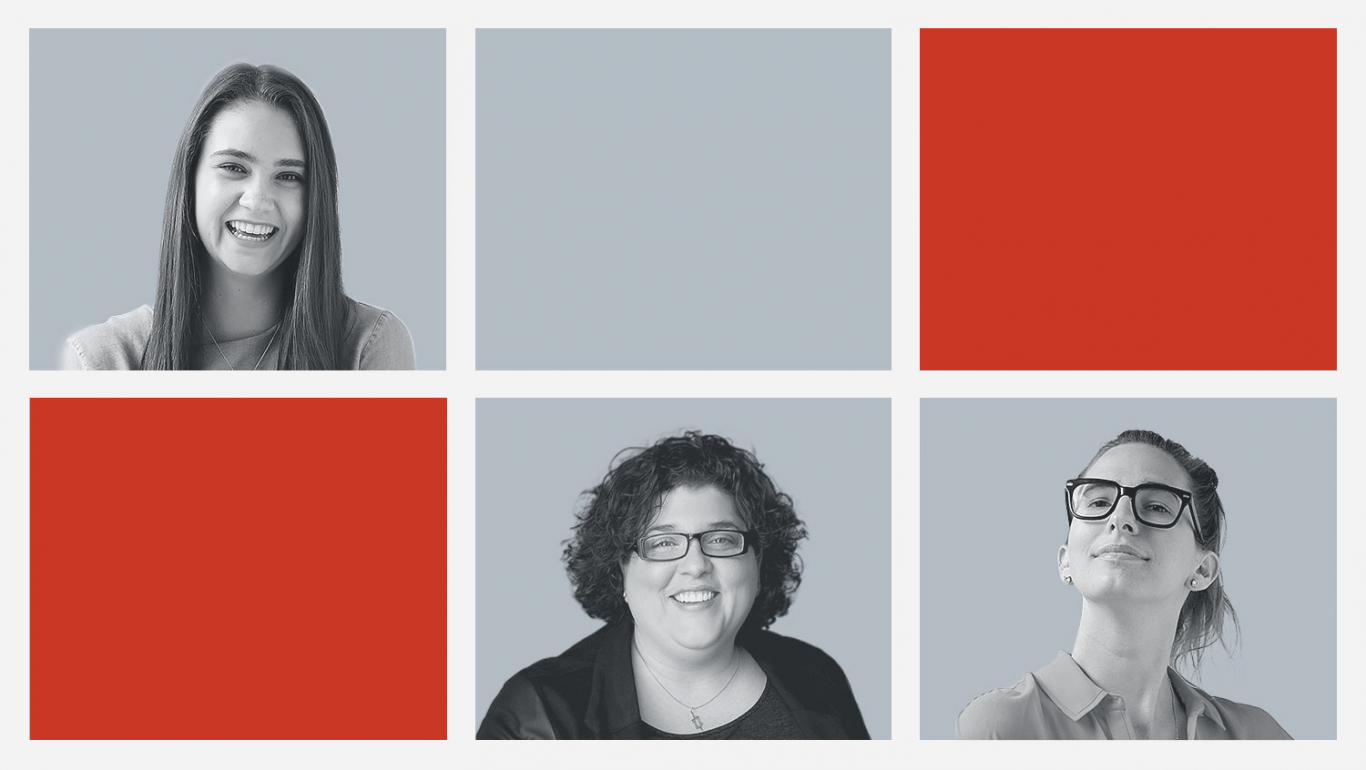 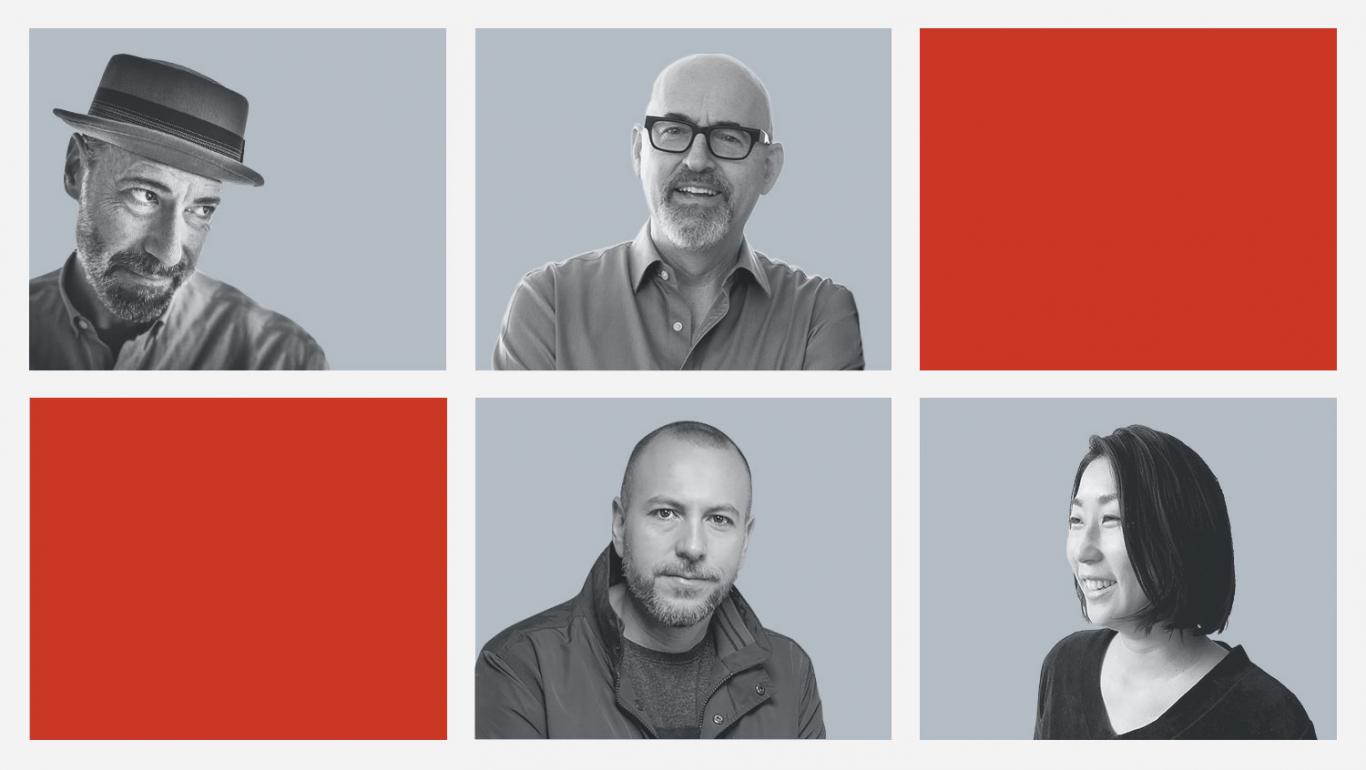 To introduce the latest edition of Works Design’s 2020 Sustainability Reporting Trends, we asked our ... 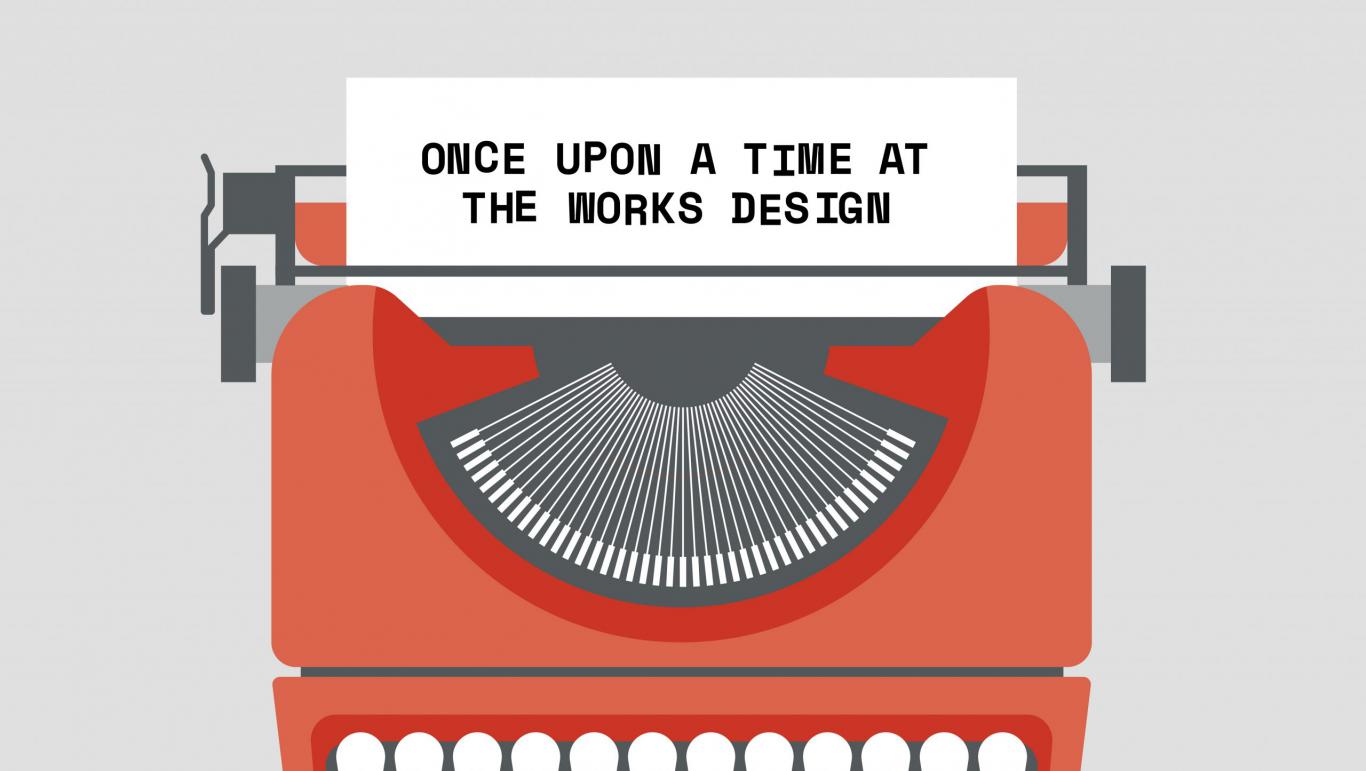 Using Our Words: the origin and ongoing purpose of The Works’ aphorisms

The Works started out as a design studio, finding elegant and compelling ways to present other ...